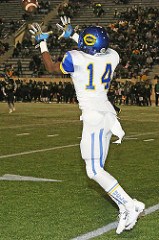 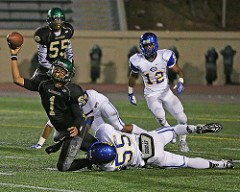 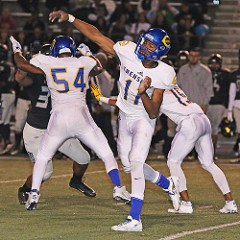 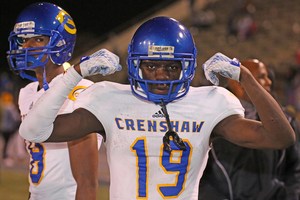 In back to back weeks, Crenshaw will face a familiar foe in the playoffs.
On Thursday evening, the Crenshaw Cougars were victorious over the Venice Gondoliers. The Cougars put on an impressive offensive performance to beat Venice 40 -20. Daiyan Henley led the offensive assault by completing 26 of 33 passes for 329 yards and two touchdowns. He also rushed for 165 yards on 16 carries and scored three touchdowns. Other great offensive performers were WR/DB Jelani Harris, who caught 10 passes for 151 yards, and WR/DB Kaloni Ford, who caught touchdown passes of 35 and 39 yards.
This upcoming Friday night, the Cougars will face off against Narbonne, a team the Cougars have faced multiple times in CIFLACS championship games. Since 2009, either Crenshaw or Narbonne has won the Division I title. Crenshaw won in 2009, 2010 and 2013. Narbonne won win 2011, 2012, 2014 and 2015. Both of these teams know that they have to bring their A-game for this one! it's the playoffs. So, the Cougars could pull off a major upset in this game. The game will be held at Narbonne High School on Friday, November 18 at 7:00 PM. We hope to see the entire Cougar Nation at the game! Tickets will only be sold at the gate.
http://www.latimes.com/sports/highschool/varsity-times/la-sp-vi-football-narbonne-and-crenshaw-dominant-teams-in-city-section-meet-on-friday-20161114-story.html Source: LA Times
Print